This article was produced in partnership with bp.

Fuel purchases are one of the easiest and most lucrative ways to earn loyalty points in Australia. After all, most households spend a considerable amount on fuel, and over time the points earned on that spend can really add up, leading to valuable rewards.

BP Rewards is a flexible loyalty program that lets you earn points every time you fill up. Thanks to the program’s partnership with Qantas Frequent Flyer, bp customers can earn either BP Points or Qantas Points not only on fuel but also on in-store purchases at bp.

When the bp-Qantas partnership was announced last year, our article on the program received a huge amount of traffic. This tells us that many Aussies want to get more ‘bang’ from their fuel-buying bucks and are interested in what BP Rewards has to offer. So, to help our readers maximise the way they earn and use points with BP Rewards, we’ve teamed up with bp to bring you this guide.

If you haven’t yet joined BP Rewards, you can sign up for free via this link and start earning points straight away.

Here’s an overview of how the program works.

When you sign up to BP Rewards, you can choose to earn either Qantas Points or BP Points on purchases, with the option of switching between the two points currencies later (more on that below).

The points earn rate at bp is the same whether you’re earning Qantas Points or BP Points. Customers can receive:

There’s no cap on the amount of points you can earn.

You can further boost your points tally by taking advantage of exclusive offers, which bp sends out by email. These offers can also be viewed online or in the BPme app.

Most in-store purchases are eligible to earn points. Some of the notable exclusions are purchases of smoking/tobacco products and accessories, gift cards, lottery products, and pre-paid mobile telephones and phone cards. A full list of eligible and ineligible products is detailed in the BP Rewards terms and conditions here.

To earn points, simply scan your BP Rewards card or digital card in the BPme app before payment. You can also earn points automatically whenever you use the BPme app to pay for fuel from your car. Alternatively, you can scan your Qantas Frequent Flyer card or Qantas App, which makes the process super easy.

Finally, you can effectively ‘double dip’ on points by paying with a Qantas Points-earning credit card. 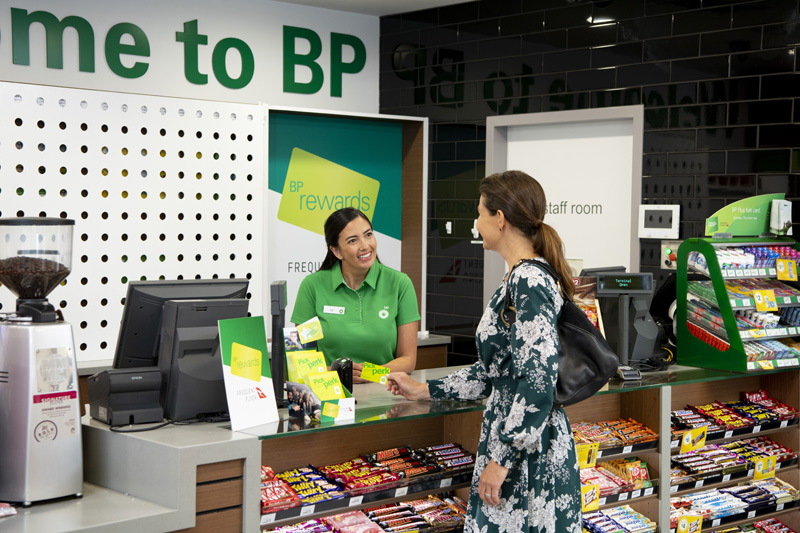 Earning points with a BP Plus fuel card

If your business or organisation has a BP Plus fuel card (which is an account that is paid off each month), you can also earn points with BP Rewards. Simply register for BP Rewards, and when you scan your BP Rewards card and pay with BP Plus, you’ll earn:

BP Plus card holders also have the option of earning Qantas Points. All you need to do is join Qantas Business Rewards and continue to use your BP Plus fuel card.

Purchases made with the BP Plus app are currently not able to earn points. Also, some BP Plus cards are ineligible for BP Rewards, for example cards issued to BP staff and government bodies. To check if your BP Plus card is eligible, call bp on 1300 277 392.

One of the great features of BP Rewards is that you can switch between points options at any time. To do so, simply log into your account and go to the Choose My Points section.

As savvy readers will already have worked out, that means you’re getting exactly 1 cent of value per BP Point redeemed, which is a solid deal.

How does that compare to Qantas Points? Well, it really depends on how you use those points.

Qantas Points can be redeemed with Qantas for flights, upgrades, hotels, wine, items at the Qantas Store and many other rewards. The value you receive from these redemptions varies and can be less or more than 1 cent of value per Qantas Point used.

For example, you’ll usually get less than 1 cent of value per Qantas Point when redeeming them on gift cards at the Qantas Rewards Store. If you like to use loyalty points on gift cards, you’re probably better off earning BP Points instead of Qantas Points at bp.

On the other hand, Qantas classic flight reward bookings and upgrades often provide more than 1 cent of value per point – so if you like to use points for travel, earning Qantas Points at bp is a good way to go.

In short, before deciding whether to earn Qantas Points or BP Points with BP Rewards, you should consider how you’ll use those points down the track.

BP Rewards lets customers make their hard-earned money go further by earning points every time they fill up or purchase items in-store at bp. Those points can be used for dollars off at bp, gift cards, holidays and many other redemptions.

BP Rewards is flexible and easy to use, and any Aussie motorist who enjoys earning points and the option of flexible rewards should consider signing-up. It’s free and easy!

To find out more and join, visit BP Rewards here.