Selecting the best possible seat on a flight is an important part of travel preparation. Those of us who spend a lot of time in the air tend to have a strong preference for where we sit (unlike the occasional traveller, perhaps), and that’s typically near the front of the cabin next to the aisle or window – and never in a middle seat!

When you fly with Qantas, you can choose a seat as part of the booking process. But as savvy frequent flyers know, by reviewing your seat choice 80 hours before departure, you may be able to significantly improve your position in the cabin.

This opportunity arises because Qantas restricts access to certain parts of each cabin to elite frequent flyers until close to departure. The most sought-after seats at the front are usually reserved for platinum-level customers and above, while the next few rows are accessible to gold status holders and above, with silver and bronze members only able to select seats further back.

Those restrictions are usually lifted 80 hours before a flight, which means all passengers can access the seats that remain unallocated. If you’re really keen on getting the best possible seat, that’s the time to review your options.

I have gold status with Qantas, so I can almost always select a decent seat when booking. Despite that, I still check what’s available 80 hours before departure. It’s a habit, and a few days ago it served me very well.

On Sunday, my partner and I flew from Perth to Melbourne. When I booked the flight, we were scheduled to fly on an A330 in economy (eek!), but when I checked the seat map at T-80, I was pleasantly surprised to find that our aircraft had been switched to a brand new 787 Dreamliner.

The Dreamliner has a small premium economy cabin that, for now, is available for economy passengers to enjoy on domestic flights (as Qantas isn’t selling domestic PE fares).

When I logged in to check our seats at T-80, I found that our original seat selection had disappeared, probably because of the aircraft change (thanks a lot, Qantas!). Fortunately there were still some empty premium economy seats, which I quickly snagged. 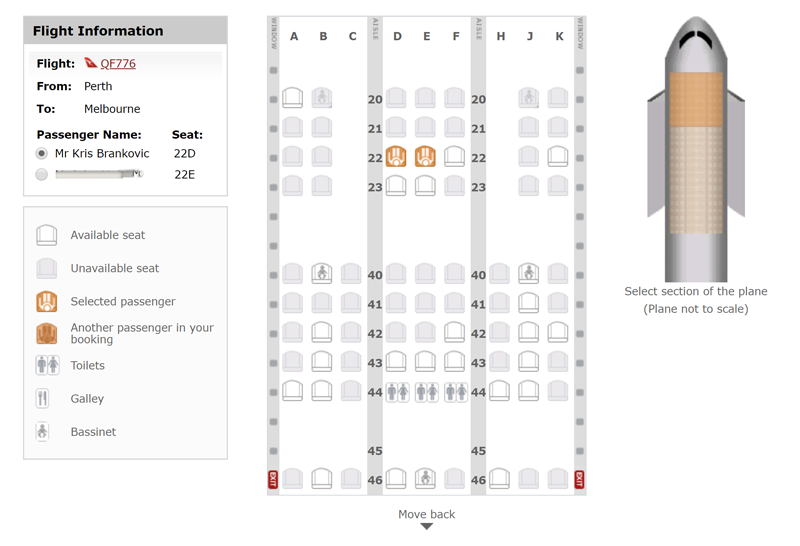 So instead of being stuck in the economy cabin, we were able to enjoy the much more spacious premium economy seats for the 3.5 hour flight home, which also happened to include a full PE meal service.

While this is an extreme example, it does illustrate the benefit of checking your seat allocation before you fly. Had I not checked, who knows where we would have ended up in the economy cabin.

(This trick may also work with other airlines, but the exact times will vary – for example with Virgin Australia, it looks like the seats open up 48 hours before departure.)

So remember, if seat selection on a Qantas flight is important to you, set a reminder for 80 hours before your flight!